Welcome to the 7th week of the Pitchfork & Crow Winter CSA!

It’s hard to believe it was just two weeks ago that we were navigating the streets of Salem to deliver your shares.  It seems like forever since we’ve seen you all.  In the past two weeks we: 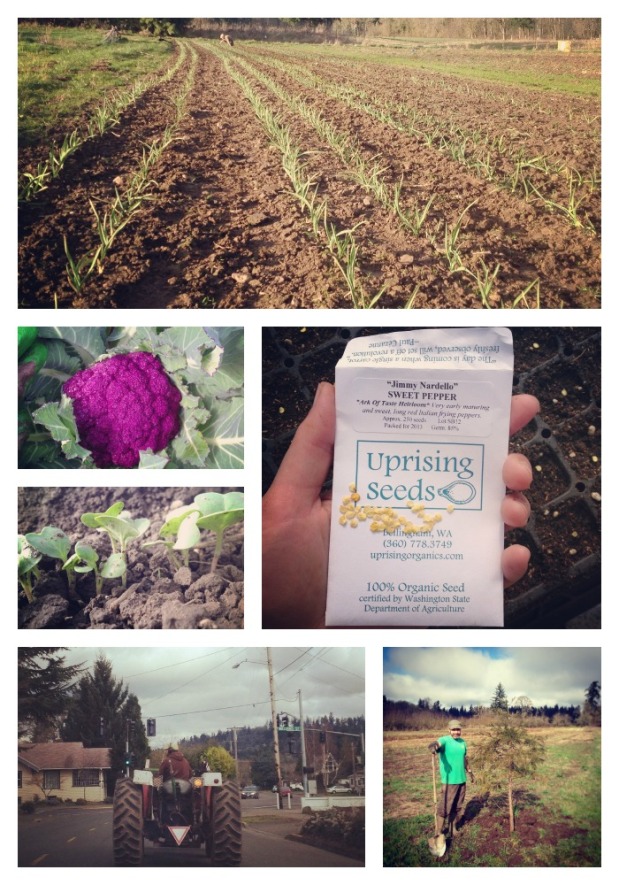 Somewhere in the midst of all of these tasks we also noticed the first signs of spring!  Although we haven’t had a harsh winter this year, the plants in the field have certainly been holding tight against the cold.  With the slow return of sunlight and slightly warmer temps we’ve seen some of the kale and cabbage shifting towards flowering.  This is the first week of the rapini some of us wait all year for!

After being transplanted into the field in August and spending the winter as large leafy plants, the first of the overwintering cauliflower is also beginning to head up.  We love overwintering cauliflower!  These guys make it through the harshest conditions and then come on just when food in the field is at it’s slimmest.  Our earliest variety is called Purple Cape, a brilliant purple head that grows like a cauliflower but tends to resemble a broccoli.  We’re hoping to see more of this in the future.

This past week we sent out an update on the farm Facebook page declaring how grateful we are for our CSA members who have paid their 2013 payments.  A friend jokingly called it a guilt trip, but we promise that we were being sincere.  The CSA model works for us because we have money in the spring, the season of purchasing on the farm.  We aren’t forced into an operating loan scheme like many in traditional farming situations.  They take out a loan in the spring and pay it back with interest in the fall when the harvest comes in.  The CSA also means that we have members invested in our long-term success and we’re always working with you members in mind.  We appreciate having money in the bank when we need to invest in something, but we also appreciate having members who support us and know they’ll benefit when we succeed.

So, as we’ve said in the past, thanks!

Enjoy the vegetables and we’ll see you in two weeks!

From Epicurious, via Bon Appétit by Meghan Sutherland, http://www.epicurious.com/recipes/food/views/Scrambled-Eggs-with-Spinach-Parmesan-51143630
.

Melt 3 tablespoons butter in same skillet over medium heat. Add potatoes, spreading out in an even layer. Cook without stirring until bottom and edges are crisp and golden brown, about 10 minutes. Slide potato pancake onto a large plate. Invert onto another large plate. Melt 1 tablespoon butter in skillet. Slide potato pancake into skillet, browned side up; cook until bottom is golden brown, about 10 minutes.

Scatter spinach, leeks, and sausages over potato pancake, each in an even layer. Season with salt and pepper, then pour in egg mixture. Sprinkle both cheeses over.

Bake until casserole is puffed and golden brown, 35-40 minutes. Serve warm or at room temperature.

From Epicurious, via Bon Appétit, http://www.epicurious.com/recipes/food/views/Potato-Sausage-and-Spinach-Breakfast-Casserole-368302
.

Make dough:
Pulse flour, butter, sage, and sea salt in a food processor until mixture resembles coarse meal. Drizzle ice water evenly over mixture and pulse until it just forms a ball. (Do not overwork dough, or pastry will be tough.) Gently press dough into a 5-inch disk and chill, wrapped in plastic wrap, until firm, at least 1 hour.

Make filling while dough chills:
Preheat oven to 500°F with rack in middle.

Toss squash with sea salt and 1 Tbsp oil and arrange in 1 layer in a 17-by 12-inch shallow baking pan. Roast, stirring once halfway through roasting, until golden brown on edges and undersides, 20 to 25 minutes. Remove squash from oven and reduce oven temperature to 375°F.

Meanwhile, wash leeks, then cook in remaining 2 tablespoons oil with a pinch of sea salt in a 10-inch heavy skillet over medium heat, partially covered, stirring occasionally, until tender, 10 to 15 minutes. Transfer to a large bowl to cool slightly. Add squash, goat cheese, and 1/4 teaspoon pepper and toss gently.

Make galette:
Roll out dough into a 13-inch round on a lightly floured surface with a lightly floured rolling pin. Transfer to a baking sheet. 3Arrange filling in an even layer in center of dough, leaving a 2- to 3-inch border. Fold dough in on itself to cover outer rim of filling, pleating dough as necessary. Brush pastry with beaten egg and bake galette until crust is cooked through and golden on edges, 35 to 45 minutes. Cool on baking sheet on a rack 10 minutes before serving.

Cooks’ note: Pastry dough can be chilled up to 1 day. Filling can be made 1 day ahead and chilled, covered.

From Epicurious, via Gourmet, http://www.epicurious.com/recipes/food/views/Butternut-Squash-Galette-351429